A successful team finds the most appropriate solutions and creates efficient links between them.

Andrei Iancu is a graduate of the Faculty of Law of the University of Bucharest and holds a Master Degree in Business Law from the Faculty of Law, University of Bucharest. He has been a member of the Bucharest Bar since 2012.
Andrei joined the litigation department of D&B in November 2015. His expertise includes tax law, civil and commercial litigation, as well as foreclosure procedure. Before joining D&B, Andrei was part of the litigation and arbitration department of another local law firm, gathering experience in civil, administrative and commercial disputes.
Andrei was an external collaborator of tax law at the Faculty of Law, University of Bucharest. He is also a permanent collaborator of the Tax Magazine publication and he is the co-author of the ”Tax Procedure Code with Comments”, 2016 Edition, edited by Solomon, Bucharest and ”Textbook on Fiscal Law”, 2017 Edition, Solomon Publishing.

Cristina Păduraru is a graduate of the Faculty of Law, of the University of Bucharest and has been member of the Bucharest Bar since January 2012.

Cristina’s areas of expertise include commercial and corporate law and mergers and acquisitions.

Georgiana Bălan graduated the Faculty of Law – University of Bucharest and she also holds a bachelor’s degree awarded by the Academy of Economic Studies and a master’s degree in Business Law. Since 2006 Georgiana has been a member of the Bucharest Bar Association and she is currently part of D&B David şi Baias Corporate M&A team.

Her experience includes advice and assistance during transactions and business consultancy services provided to a large portfolio of clients, mainly to national and international players in constructions, electronics, real estate and retail fields.

Georgiana has also gained extensive experience on corporate governance during a 2 year in-house counsel position with one of the largest real estate developers in Romania.

Ioana Cercel is a graduate of the Faculty of Law of the University of Bucharest and of the French-Romanian Law College for European Studies.

She also holds a Master degree in Business Law from the University of Bucharest. She has been a member of the Bucharest Bar since February 2009.

Ioana joined D&B in 2011 and is part of the litigation department, being specialized in civil and commercial litigation. 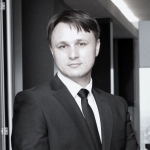 Lucian is a Bachelor of Law of the University “Alexandru Ioan Cuza” of Iaşi (2004), and has been a member of the Bucharest Bar since 2015.
Before becoming a lawyer, Lucian activated for 6 years as a competition inspector within important departments of the Romanian Competition Council such as Research, Industry and Energy and Cartels. As a competition inspector, he participated in many dawn raids conducted by the competition authority and investigations regarding vertical anticompetitive agreements or cartel type agreements, as well as in the assessment of economic concentrations.
As a lawyer, Lucian has been involved in complex projects such as assisting important clients during the investigation or dawn raids conducted by the Competition Council, drafting legal opinions on different competition law concepts and state aid procedures, conducting mock dawn-raids and implementation of compliance programmes within different companies.

Ovidiu is a Bachelor of Law from the University of Bucharest and has been a member of the Bucharest Bar since 2009. Ovidiu is a member of the D&B David si Baias Financial Services Team and his expertise covers banking, capital markets, personal data protection and corporate law.

Ovidiu was involved in providing legal assistance to non-banking financial institutions, asset management companies and listed companies regarding the performance of credit portfolio acquisitions, changes in the shareholding structure and share capital increase operations. Ovidiu provided legal assistance with the setting up of a credit institution, as well as in relation to various financial services regulatory authorities.

Decide which cookies you want to allow.You can change these settings at any time. However, this can result in some functions no longer being available. For information on deleting the cookies, please consult your browser’s help function.Learn more about the cookies we use.

With the slider, you can enable or disable different types of cookies: